Hard to believe that Nov 17, 2014 has already brought this amount of snow to Ohio. Looks like it definitely is going to be another year like last winter which was awful.

The main garden always looks pretty though, whether it's all alight with the colors of the season or covered in white snow, looking almost like a black and white photo, other than the peek of green on the Pinus Nana on standard or the burgundy leaves still showing on the Acer p. Fireglow. 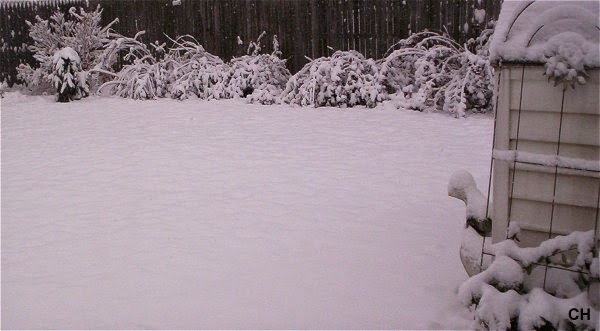 Hard to believe there are still burgundy leaves on those shrubs they are so covered with the snow.

This is the same above view a month earlier, after doing some cutting back of perennials and leaving only shrubs. 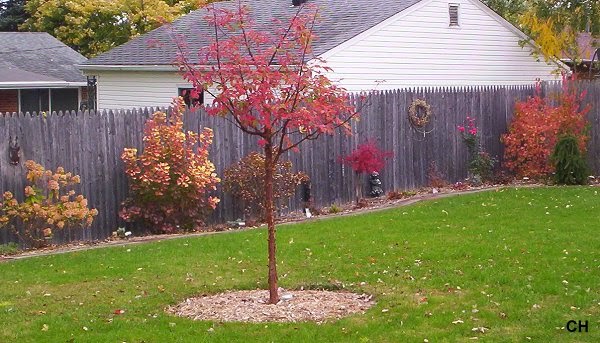 I did a lot of work out here this year with all of the losses to be had after last winter. The right side here is bare but I had just cut back any perennials and had added the Japanese Maple in there. Figure it will take a few years to fill in like I want. Next Spring I intend to remove my Crabapple from the front yard and move this Paperbark to that location. I love the Crabapple, It's a glorious tree in spring but the suckers from it are way more than I ever planned and I just don't want to deal with them. This is a huge project so my brother will be coming in to handle this for me. The Paperbark has only been in a couple years so I should be alright moving it. 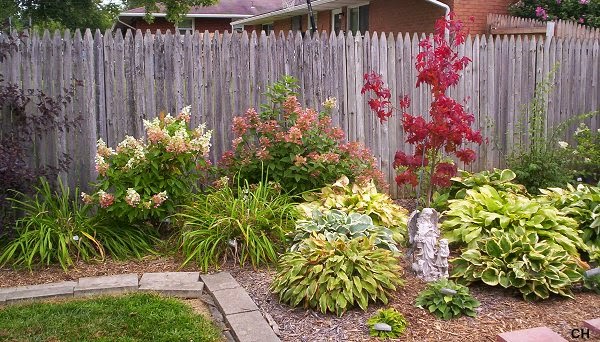 The Hosta garden in September with a few Hydrangea helping to add some additional color and blooms to the area. 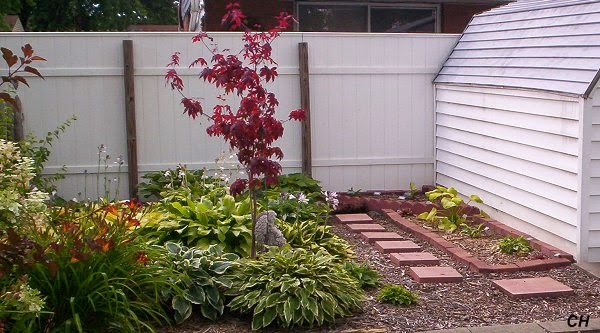 The other side of the Hosta bed. I just finished the right side of this. There are Hosta in the corner area and all alongside the shed. Should come in looking good for next year. Hoping I can keep the Hosta doing well with slugs. If not I'll have to rethink the plantings. Have possible changes I'll make on the left with shrubs but will wait to see how things look next year with what I have there right now. 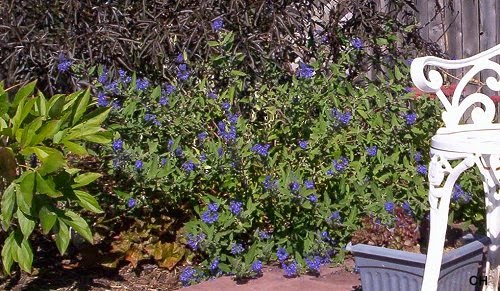 The Bluemist shrub was loaded with blooms this year and outgrew it's area more than usual. Guess I need to prune back further next year than I did this year. 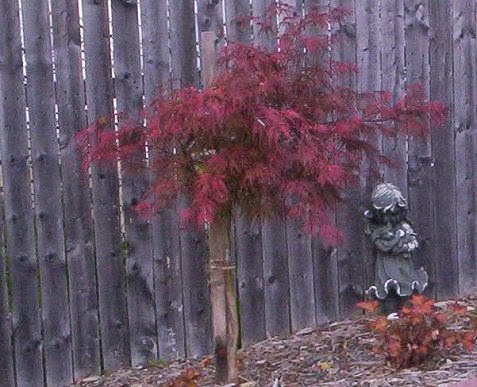 A closeup of the Acer p. Garnet I added in the spring. Love the weepers. Just got another variety this fall on discount that I will add somewhere or other.

Well it's been a while since I have been on my blog. Time has gotten away from me and still is which I guess over winter is not as big a deal but will try to visit more than I have in the last couple months. Have some nice holidays!

Posted by Sunray Gardens at 9:48 AM

You've been missed :)
The snow didn't miss us - looks like we got about what YOU got.
I enjoyed seeing your September beds here. Hosta and hydrangea....doesn't get much better than than in my opinion.

Welcome back Cher! And hopefully all your plants are safe underneath that blanket of snow. Enjoy the coming holidays there!

Hi Cher, Your hosta and hydrangea areas looked truly beautiful in your fall photos - so did your green lawn! The snow makes beautiful photos too, too bad it's brutally cold in the midwest!

You certainly made everything nice in your garden this year. Amazing blanket of snow. We got the cold and snow too. Too early!!!

Oh...please... snow is covering your beautiful garden. Hope everything will be OK.

Now that the gardening season is over, most of us have more time to blog, including me.
I'm reading about your losses from last winter and all that you've done to fill in this summer, I hope they survive! With the harshness we can experience I always look for plants rated a zone or two lower than what we are - for insurance. :-)
Judging by how winter is coming in, we could be in for a long and cold one again. Oh well, returning to what it used to be like for us.
Stay warm!

Do you have any plans for the garden. Snow fell, but I do not wish this winter like last year. Regards.

Hi Cher!
Hope all is well for you and your garden. I see the weather for you this year is a bit extreme. Your snow covered garden is lovely. Hang in there Dear!

Love your garden I did not post on mine for year and now I am having a hard time getting back on
www.gardeningwithjuanita.blogspot

Sunray Gardens
Gardening and Yorkies. I enjoy gardening, reading, and have shown dogs for 30 plus years. 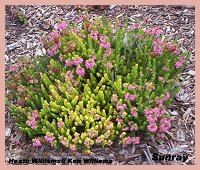 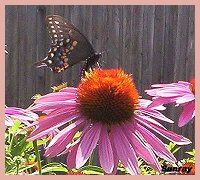 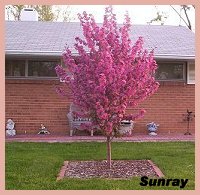